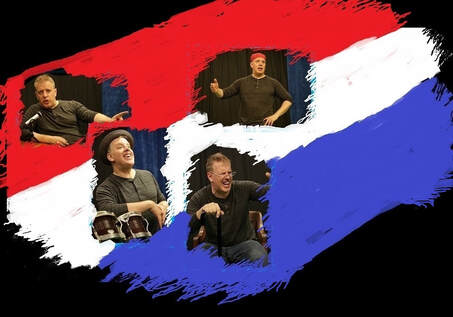 (July 2019, Capital Fringe Festival, Washington DC)
"FIVE STARS - Damiano’s performances are remarkable for their directness and lack of artifice, and I found myself revisiting these characters in my mind long after I had driven home and into the next day, a credit to not only Damiano’s performance but the depth of the writing. This show deserves to have a long life beyond Capital Fringe."
- Jeffrey Walker, DC Theatre Scene

(Oct/Nov 2018, East Village Playhouse, NYC)
"FOUR STARS - ...a truly impressive performance on the part of Mr. Damiano. Armed with a writer’s ear for capturing dialogue and an actor’s flair for delivery, he makes his characters impressively real and uniquely vibrant. - Stanley, Achmed, Morgan and Ronnie are each so well-defined and engaging on their own, it’s easy to get lost in the performance. - Mr. Damiano’s performances generate enough energy to keep anyone captivated. American Tranquility presents a vertical slice of American society that’s just as messy and complex as the real thing. It’s also a witty and absurd breakdown of both sides of thecountry’s “great divide". Whether you have a taste for social commentary or just love good old-fashioned character work, don’t miss American Tranquility. - …an exceptional piece of theatre.”- James Bartholomew, All About Solo
​​
(April 2018, Theatre 80, Downtown Urban Arts Festival, NYC)
"American Tranquility is probably one of the best one-person shows that I’ve ever reviewed, both in terms of its performance and its concept. The brainchild of the highly talented character actor Daniel Damiano, this show explores many of the social, political and cultural divides that pervade America. -  In the case of Mr. Damiano’s play, I do hope that this isn’t the last that we hear of this show, as I anticipate that the political climate will ensure that it remains as relevant as ever, for the foreseeable future."
​- Anthony J. Piccione, OnStage Blog 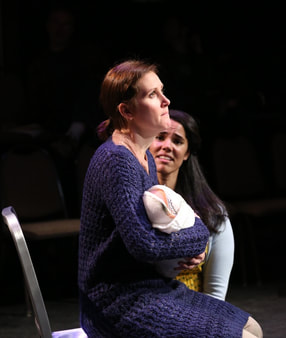 l-r, Brooke Turner (Jenny) and Jasmin Norwood (Sherry). Photo by Gerry Goodstein.
​"THE DISHONORABLE DISCHARGE OF PRIVATE PITTS"
(November 2015, IATI Theatre, NYC)​​
​"This play is a heroic underdog that points a dirty yet necessary mirror back at its viewers. - I actually cried in a public setting (something I typically refuse to do). The script made me envious and doubt my own talents as a writer. - It is impossible to highlight the standouts amongst the actors as any one of them (most of them playing multiple roles) could very well be pinned as the best of the best- This play deserves a longer run and more attention – and while it has a quaint home now in the meager space in which it currently reigns, it’s sad to think of how many plays out there are thriving on half of the valor and entertainment that The Dishonorable Discharge of Private Pitts beholds.”
- Louis DeVaughn Nelson, CenterOnTheAisle

“The Dishonorable Discharge of Private Pitts moves us to reexamine our values of faith and our community in the face of war. It is an intimate character-shifting ensemble epic. -MacGowan and team tell Damiano’s story as both an immediate and a cerebral experience. With Brooke Turner’s exacting performance, The Dishonorable Discharge of Private Pitts leaves a lasting and pressing impression. - The supporting cast both embrace and rage against the plight of war as a modernized Grecian chorus. Rapidly switching characters, from citizens of the United States in the aftermath of 9-11, to drop-outs bonding in a group home, to US army privates and sergeants stationed in Baghdad, every member of the ensemble gets a chance to expresses a unique view on the transformative powerof finding a calling.” - Artem Yatsunov, Theatre is Easy

“Powerful, with captivating scenes that evince emotion and point to the institutional flaws we often blindly accept in the realms of parenting, in religion, and in the military. –The Dishonorable Discharge of Private Pitts is heartfelt.”
-  ReviewsHub 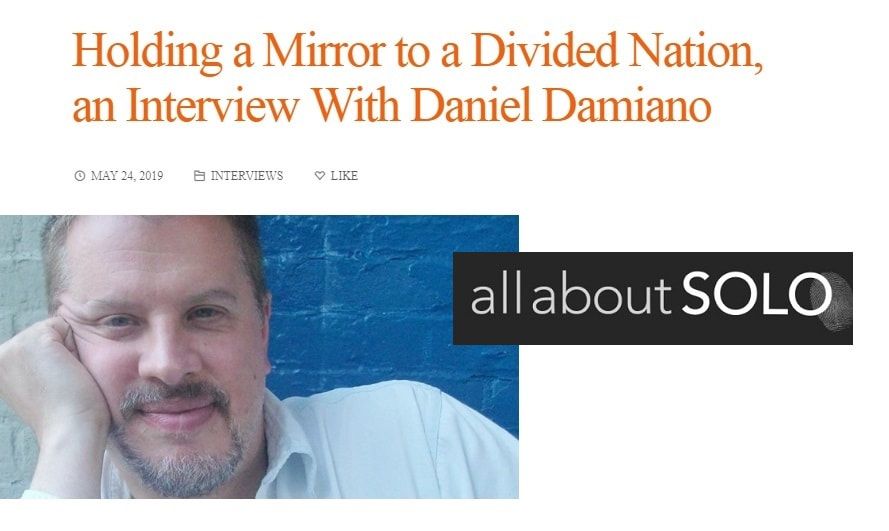 ​Our Press Release for the Extended Run of AMERICAN TRANQUILITY
​on BroadwayWorld.com.  (Click on image below) 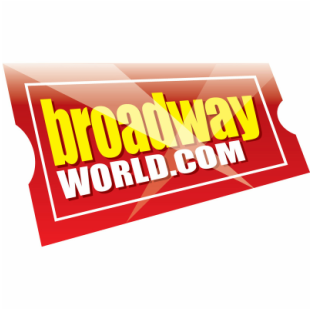 ​In the Spring of 2015, fandango 4 Art House was profiled by Backstage for
"How Do Small Theatres Do It"

In Backstage's interview with fandango 4 Art House's Co-Founder/Artistic Director, Daniel discussed our inaugural production - THE DISHONORABLE DISCHARGE OF PRIVATE PITTS, as well as the  general challenges of producing
​not-for-profit theatre in NYC.